Lemme tell you, if you ever know anyone who needs a commercial VO coach who’s really on point, just let me know. 😉

I got someone who’s great – literally the first agent (ATLAS) who heard the demo Nancy produced for me after our coaching wanted to sign me!

Just wanted to crow a bit: booked a series of four :60s this week.

This will pay for the entirety of my coaching with you including demo. Recorded the first one yesterday, next three to follow whenever, shortly I’m sure.

It’s been just four months since I sent out that new demo and onboarded my new slate of agents.

Over the just-about-40 years I’ve been in the Talent Management Biz, companies with my name on them have been blessed to represent a few of the Top Voice Over talents in the Industry… folks who’ve voiced the likes of post-Mel-Blanc Daffy Duck, Taz, Pepe LaPew and 12 of his other characters, 20+ Krofft Brothers characters, Tiny Toons, Casper’s pals, The World’s Fastest Talker/Micromachines Man, more commercial V/Os than I can count, and more…

And I’ve gotta tell you, if you’re even THINKING about getting into V/O, (and she’ll be honest, it’s her best trait), there is ONLY ONE COACH/TEACHER you should even consider giving your voice and money to:

Nancy Wolfson and her BrainTracksAudio!!! JUST DO IT!

You should make a demo that shows a strength that is uniquely yours. With the digitization of the industry, thereby you now compete with every talent for almost every gig. The competition is stiffer than ever.
If that hasn’t deterred you, we suggest that you go to Braintracksaudio.com. We recommend Nancy, as she specializes in creating voice talent demo materials and consult on customized ‘talent’ business plans that will work in today’s crazy new VO marketplace.
Listen to the demos on the site, each one created to make a memorable statement about the voice and stand above the rest. It’s ‘new school’ VO.

Remember on our last call I told you I reached out to TMG, a big local agency here? They had me come by today and are bringing me on! She loved the demo!

I began to listen 👂 once again to your Acting for Advertising series. As relevant today as it was when u guys recorded it.xo

Tom Knight
Crown royal booked me for an NFL spot from a byte at the end of my demo.

I Love this! I’ve had a few demos done at this point in my career and no one can hold a candle to what you guys have done. The pacing is perfect, the music and fx don’t upstage the vocals, I’m so pleased. I won’t lie, Nancy set a very high expectation for me and this demo, and you guys certainly delivered! I’ve listened to it very carefully quite a few times and don’t even know how to nit-pick it. You guys are awesome!

I have recommended you to everyone I meet that’s interested in learning from someone who actually knows what they’re talking about.

So…guess who is the new narrator for Season 2 of The Movies That Made Us on Netflix! Yes, Me!!!! I’ve been wanting to tell you since I booked it but didn’t want to jinx anything until I recorded the 1st episode, which we did yesterday. 11 more to go! I really want thank you for your amazing tutelage and guidance. I wouldn’t have been able to do this without your techniques and tricks! And on top of that, I got a new eLearning client who booked me because “you sounded really conversational and relaxed and that’s what we were looking for “. That definitely wouldn’t have happened without your help! So thank you and I hope you can feel the love!! 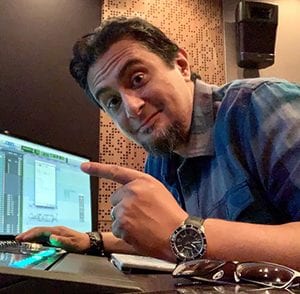